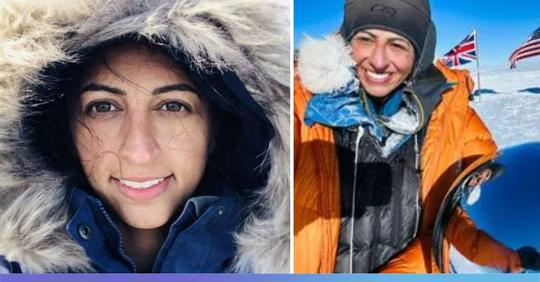 The British-born Indian Woman- Captain Harpreet Chandi is a  British Sikh Army soldier. The physical therapist just broke the previous record for the longest female arctic solo, by traversing  1,397 kilometers of Antarctica in minus 50 degrees cold. Captain Chandi has now become the first woman of Indian descent to break the record for the longest solo unassisted walk to the South. In 2020 Anja Blacha established the previous benchmark, a distance of 1,381 kilometers.

Harpreet posted her blog on Thursday mentioning her most recent polar journey in which she wrote, “It was very cold and windy but I kept my breaks very short so I didn’t get too cold. I didn’t let myself stop earlier though because I wanted to get the miles in.”

With the original goal to be the first woman to cross Antarctica alone and unaided, she feels sad about not acquiring enough “I’m pretty gutted that I don’t have the time to complete the crossing. I know that I have done a huge journey, it’s just difficult while I’m on the ice and I know it’s not that far away,” she wrote.

Her adventure began 3 years ago when she chose to cross Antarctica and started learning about the location. In order to gain some knowledge & get the experience she delayed her application to Antarctic Logistics and Trips (ALE).

Soon after finishing Phase 1 with her South Pole expedition in 2021, she commenced working on her new goal.

The University of Derbyshire appreciated her with an honorary degree for breaking the “record for the longest solo, unsupported, and unassisted polar expedition by any woman in history.”

The 33-year-old Derby native who works at a local rehabilitation facility in Buckinghamshire embarked on her journey in November 2022 trudging through sub-freezing conditions while pushing a sled loaded with all of her gear.

Harpreet served as a British Army officer in large-scale operations and deployments in Nepal, Kenya, and South Sudan for the United Nations. She also participated in marathons and ultramarathons as an “endurance athlete”.

Harpreet has always been keen to test the limits of the human body and views her journeys as a part of a larger aim.

Hairstyles women are asking for in 2023