include things like pasta, chRajasree R from Kerala has been making over 400 value-added products out of jackfruit. These ocolate, flour, etc. 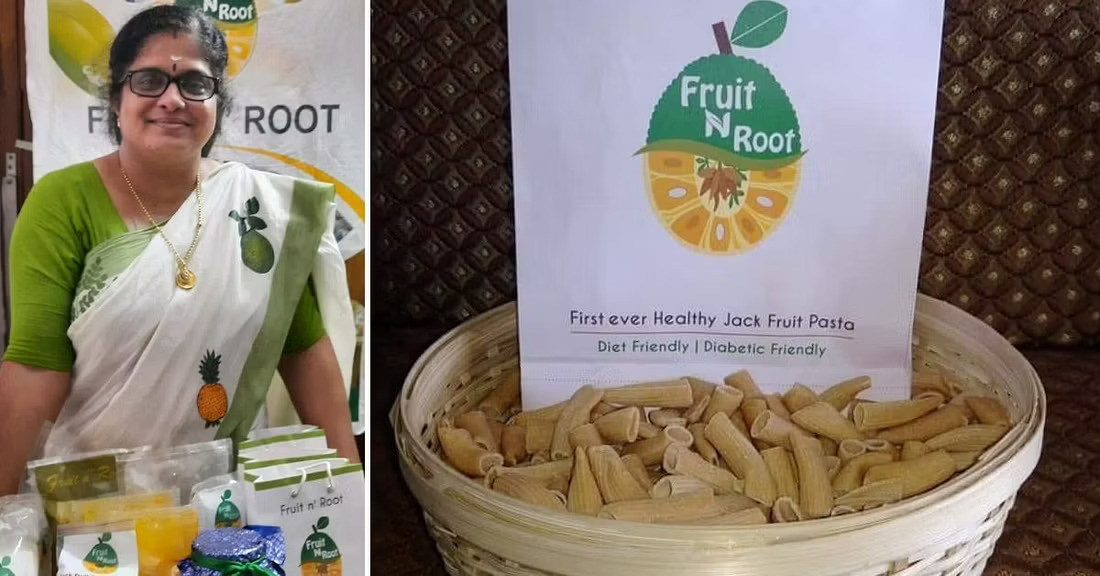 Can the hatred towards something make you develop a business out of it? Something interesting like that has happened with Rajasree R and her dislike of the smell of jackfruits.

Rajasree R had been living in Qatar and whenever she visited her hometown in Kerala her mother used to give her sun-dried jackfruit to take back to Qatar. Rajasree hated the smell of the fruit which did not get eliminated even after sun-drying them. But unlike her, her friends in Qatar used to love jackfruit and hence she used to take the dried jackfruit with her to Qatar to give to her friends.

Years later, in 2016, Rajasree R and her family shifted back to Kerala for her children’s education. For years Rajasree had been thinking about a way to eliminate the smell of jackfruits. This time she decided to give it a try. “Jackfruit is very versatile and if dried and processed well, it could be a good alternative for flours like maida. But the smell had to be eliminated. So, I was looking out for a technique or technology to make it possible,” says the 50-year-old Rajasree.

“After getting an FSSAI license, I came across the technology to dehydrate jackfruit bulbs and their seeds at the Krishi Vigyan Kendra (KVK), Kayamkulam. The technology helps in drying and making high-quality powder out of jackfruit by eliminating the smell thereby letting you make a wide range of value-added products out of it,” she says, adding that she now makes over 400 varieties of products out of jackfruit under her brand name — Fruit N’ Root.

Rajasree makes use of the tender, ripe jackfruit to make value-added products ranging from all-purpose flour to jackfruit pasta. “At KVK, they were already making different products using jackfruit. So, I learnt the technology and decided to make something different. My sons are fond of pasta and burgers, therefore I thought of finding an alternative for the maida used in all these types of foods,” she says. “After some research, I discovered that jackfruit pasta was never attempted by anyone else, so I decided to try it. By experimenting a bit, I figured out how to make it out of jackfruit,” claims Rajasree.

To make pasta, required a machine and Rajasree was then on a quest to find a tapioca pasta maker at the Central Tuber Crops Research Institute (CTCRI) in Thiruvananthapuram. “I tried making jackfruit pasta using that machine and it worked out. Later I got the technology transfer and launched the product,” she adds.

Other than jackfruit pasta, there is a long list of products like jackfruit burger patties, jackfruit vermicelli, payasam mix, jackfruit and jackfruit seed flour, and even chocolates. According to Rajasree every part of jackfruit can be used for some use. She has been showcasing her talent in various food fests and exhibitions since 2016, and recently she won the ‘Best Jackfruit Processor/Other Value Addition 2021’ award from the Kerala Government.

There is also a long list of delicacies that can be made using jackfruit she says, “Jackfruit wine, ice cream, pudding, cakes, payasam are a few among them. Also, I make jackfruit flavoured curd and buttermilk using its puree,” she adds.

For making the products Rajasree uses jackfruits from her native place — Nooranad, in the Alappuzha district. There almost every house has around 5-10 jackfruit trees. And before without a proper consumer for them, the jackfruits used to go to waste. But now Rajasree has established a team of 10 women to source and process the fruits.

“They separate the jackfruit bulbs, blanch them, dry them and store them there. Later, we powder it, according to the requirement. Only the processing is done at the unit,” Rajasree elaborates. “All of my products are purely organic as I don’t use any kind of chemical ingredients,” and hence the shelf-life of most of her products is short.

Apart from making value-added products from jackfruit, Rajasree also makes products out of tapioca, banana, moringa and organic rice grown at her farm.

The business demands Rajasree to be a home chef very often, as she takes orders for curries, payasam, etc. and also a special item named Chakkapothi — rice served with several jackfruit-based side dishes wrapped in a banana leaf. She also takes orders for traditional Kerala sadya (feast) in which all the side dishes like avial, sambar, thoran, eraissery, etc. are made with jackfruit.

Among the wide range of products that Fruit N’ Root offers, she says that the jackfruit powder, priced at Rs 700/kg, is one of the fastest-selling products. Rajasree, who currently sells her products through Facebook and Whatsapp and plans to sell her products on platforms like Amazon very soon.