Beating the odds, Geetha Saleesh from Kerala didn’t let her disability get in the way of running her successful online business that delivers pan India. 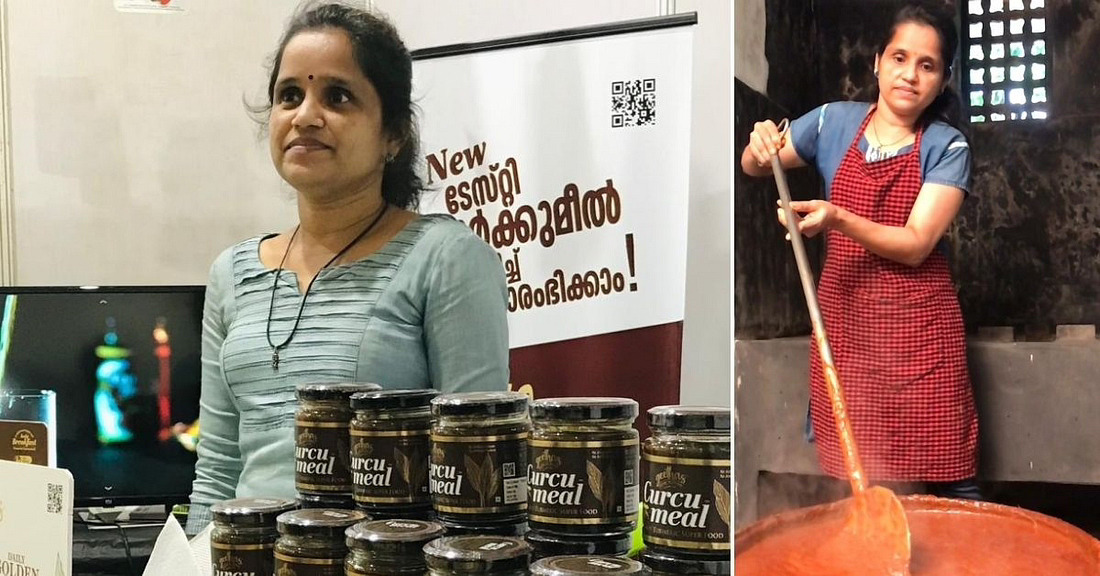 Geeta Saleesh from Thrissur, Kerala has proved that being visually impaired cannot stop her from achieving her dreams. Geeta was just 13 when she was diagnosed with retinitis pigmentosa, a rare genetic disorder. She slowly started to lose her vision and turned completely blind by the age of 15. But now, at the age of 39, she runs a successful online business that sells homemade food products like ghee, pickles and also a superfood supplement made out of turmeric.

She launched ‘Geetha’s Home to Home’ along with her husband Saleesh Kumar in 2020. The couple ran an organic restaurant before, that used to serve food and drinks made using organic ingredients including vegetables. But they had to shut the restaurant when there was an issue with the rented space. “But the mass cooking experience at our restaurant gave me the confidence to start this online food business,” says Geetha.

It was the lockdown that helped Geetha come up with the idea of starting this business. “During the lockdown period, I felt why not start an online business? Also, with my prior experience in cooking, I was confident enough to start a food business. My husband and my children encouraged me. So, I slowly started selling a few products like homemade ghee and pickles online,” says Geetha.

Geetha, who started her business early last year, mainly used social media to sell and promote her products. She eventually introduced a few more products including a special product named ‘Curcu meal’. “It is the most sought out product currently. We developed a Curcu meal after researching it for three years. It is an improvised version of ‘manjal varakiyathu (turmeric blend)’, which is normally given to women after childbirth. It is a blend of turmeric, dates, almond, coconut milk and jaggery. I would say it’s a superfood supplement as it has all the goodness of turmeric,” she explains.

Geetha adds, “We use turmeric named Prathibha which has the highest curcumin content. Curcumin is the bioactive compound in turmeric which carries all its potential. The higher its content, the better the quality.” Curcu meal, which currently has thousands of takers across the country is priced at Rs 600 per 500 gm bottle.

Served in the form of a paste-like Chawanprash, the Curcu meal can be consumed raw or by mixing it with hot milk, says Geetha. “It’s good for everyone from children to adults. Since it’s made out of turmeric, it’s healthy and has no side effects. We have been getting orders even from Kashmir. I am happy that my research didn’t go to waste,” she says.

With the success of her signature product, Geetha now earns over Rs 50,000 per month and has launched a website to showcase and market her products.